Each 10 years, NECLIME sets itself new scientific targets. Appointed by our members in the 2019 meetings in Weimar and Saint Petersburg, new objectives of NECLIME were defined for the forthcoming decade.

The well-established NECLIME topics related to paleoclimate and paleovegetation focus on quantitative, proxy-data based reconstructions of climate and vegetation patterns in time and space. The analysis of interactions between paleogeography, vegetation, fauna and climate combined with biome modelling approaches is of increasing importance. To understand the processes behind the data reconstructed and hence the Cenozoic climate system, also modelling approaches, regarding atmospheric and ocean circulation, are important NECLIME topics.

In addition, a focus on past biodiversity is now included. The history of biodiversity was already often discussed at NECLIME meetings of the last years and shall now be a central priority including various sub-themes such as evolution and dispersal. New ideas on the quantification of biodiversity through time and standard approaches across different proxies (e.g. macro- and microfossils) will be thematic topics in the future. 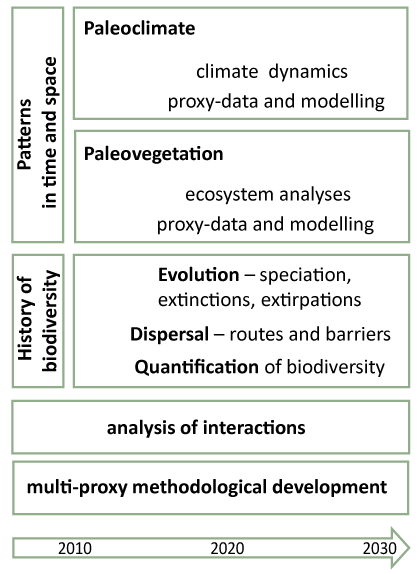